Chapter Two of the starting of Emerald Quality, or Emma, Emmie, Pooface, or whatever her nicknames are depending on the day.

The first part of the winter season was mild, which has allowed the girls at the farm to accomplish a lot more than normal at this time of year, and it actually has been an enormous relief since I have been stuck in my own house for over five weeks, with only an occasional drive to the farm permitted to stand around to see the progress. Asking the girls to cope with piles of snow on the ground would have been rather inhumane at best.

Emmie hasn’t really reacted to her new surroundings at all. She likes her turnout, has a good view, is easy to catch, eats well, drinks well, keeps her blankets on, doesn’t run, and generally appears to be a pretty complacent animal. The older animals around the farm have been less well behaved. I don’t make it a common practice to give smooches, but Sarah PROUDLY proclaimed she snuck in a smooch without being bitten in return. Good, Sar, good. All of this fuss is more for reassurance toward the mare that the girls are here to help her learn, not hurt her chances of being successful, and it seems to be working. Emmie had a tendency to back up when you tried to put a blanket on, either out of confusion or curiosity, but a combined effort to distract her with even a modest amount of attention up front seem to help her.

The process of breaking her has been extraordinarily easy. The biggest complaint I heard in the beginning was that she wouldn’t go, so I warned the girls to please have someone on the ground encouraging her to go forward while she was learning how to get to the trot. The last thing I wanted was an attractive donkey to fool with. They figured it out, and spent an enormous amount of time doing transitions from walk to trot to halt to trot and back again. First on the lunge line unridden, then ridden, then free of the lunge line on the same circle, gradually increasing to use half the ring. Stacey was particularly religious about voice commands, something I have never mastered myself, but I can actually see a difference with the method. Emmie has also seen multiple riders, which I have always believed helps the young ones from being too keen with a certain person.

So far everyone has agreed she is an exceptionally smart animal, showing little signs of fear, which will be a huge advantage to her future career. She could care less about stepping over poles, which we introduced after only the second week. Finding the trigger to the canter is proving the bigger challenge. Emmie doesn’t have a lot of ambition to go fast, and with the combination of the girls breaking a young horse for the first time, some days have proven quite comical. Stacey was the first to attempt the canter, and all I can say is THANK THE LORD it wasn’t summer, otherwise she might have passed out from the exertion to get to that final gait. There was so much grunting, groaning, and other expletives, it was just not possible for me to keep a straight face. We managed one lap to the right, and half a lap to the left after multiple failed attempts, but that is totally fine, I wasn’t worried. No bucking, no spooking, just a really beautiful extended trot for the most part. I carried a lunge whip from the ground to add encouragement, but she basically ignored me. 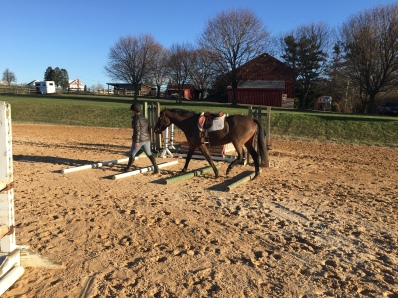 Besides finding the canter gear, the main challenge so far has been dismounting, it seemed odd for Emmie to comprehend that the rider should come off of her back after a ride. So Stacey has spent more time at the mounting block just working on getting up, down, standing, even using the mounting block to dismount (I KNOW, I told her to do this because of my own personal knee injury which prevents me from a proper dismount – hush)  There are days when the ground is frozen she can just work on this without having to do any other flatwork. Fine by me.

One of the biggest mistakes I see in people working with young horses, is the feeling that they should be ridden like old horses. I have never understood this. Young horses do not come with a prepaid education. They literally have no idea what the heck is going on.  There is no structure requiring you to have a Walk/Trot/Canter session in both directions and trot a cross rail. Some days just getting the tack on and standing around the ring or field is actually a very good lesson of the day. And healthy. Over achieving has never been my thing. Repetition works wonders. I could care less if you think it is boring, because repetition solidifies education – good or bad. Bad habits are hard to break for a reason. Well educated horses never waiver from what they have repeated ten thousand times. It is not that complicated. It is how we learned to write out the alphabet, one letter at a time over and over again.

The making of a childrens hunter, for example, is not a competition to see how much the horse can accomplish in the shortest amount of time. There needs to be an incredibly solid foundation, because that childrens hunter is going to see a lot of questionable rides in its future, and it needs to understand what tolerance is. Six weeks mastering steering and Trot/Walk/Halt transitions? Sounds good to me. When you can recognize that you have a little quality in your hands, you know six weeks is a blip on the screen of a young horses life.

Emma’s first road trip to an indoor was so easy. She loaded up with the older horses, and ate hay while waiting her turn. She thought she was supposed to paw, but we reminded her no, and it stopped. After the first set was finished, Stacey pulled her off, walked her into the indoor, I held her while she was tacked up, then she went for a short lunge and then short hack. We managed to get a bit of canter, with Stacey huffing and puffing, and then she hung out on a loopy rein while the other horse jumped around with Dani.

The temps are dropping quickly here in Maryland, we will finally see a bit of the real season, but I am pretty happy with her progress so far, I think this spring will be super fun for all of us.