Frankly, I think the horse show world has bigger problems than the use of Medroxy-progesterone / Depo /Regumate / Altrenogest. However, since the past high profile abusers of harder drugs, (like GABA and reserpine), have paved the way for us by demonstrating poor competition tactics, we are all stuck here thinking the same thing…. what is going on? Why is the new regime of the US Equestrian suddenly pinning us all up against a wall? El Chapo is on the run and we are all paying the price? So we need to deal with this, apparently.

The rumors of banning hormone usage cut deeply into our horse show community and it didn’t take long to realize the adverse affects the ban would have. Trainers have trusted their own veterinarian recommendation to use hormones to control unsavory behavioral issues which have been known to potentially put not only horses at risk to their own self-inflicted injuries, but humans as well, (i.e.: When Mares Attack).  Now those same trainers were befuddled by the sudden contradictory claims by a horse show organization. The USEF, now known as US Equestrian chose a path toward ‘Clean Sport’ in what some people think of as a harsh manner. They seemed to be claiming we should all wake up and see the horse world in the same manner as outsiders see us. As horrendous drug abusers. K.

So a “Workshop” is scheduled for March 13, 2017, to discuss Hormone Usage. In Orlando, Florida. 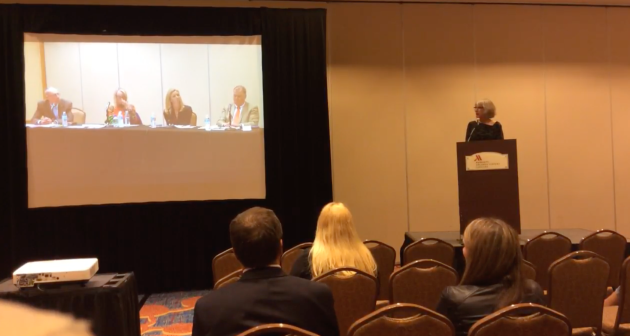 Mary Babick speaking during the Workshop

A rough start to the Workshop could possibly be conceived as a gross understatement. Members were promised a live feed, which would have been great since travel to Orlando is not a luxury most of us can afford. We were blessed with an apology on the website, stating the technical difficulties would be preventing us from actually watching any discussion and we would need to tune in later for the ‘On Demand’ version. Meet me when I am boiling hot angry.

Then suddenly, someone announced it was up and ……..buffering. The buffering was quite possibly worse than having three root canals in a row without novocain. The crew was obviously scampering to fix the horrendous problem, but to no avail. It buffered continuously for three hours, making speeches and questions impossible to follow fluidly. From the camera angle, seats looked depressingly empty.

Struggling to hear the first speaker, I made out that he was insisting we, as horse lovers, have a better commitment to welfare of the horse. The demise of the circus was discussed, the animal rights groups were discussed and it was a well rehearsed speech to scare us into thinking we were torturing our animals by injecting them with various pharmaceuticals. Awesome, but if that is the case, we really shouldn’t be horse showing at all, and our horses should just be kept in our backyards stuffing themselves with round bales and carrots. Let’s be real here.

The second was Stephen Schumacher who spent a painful amount of time detailing scientific research about Depo Provera simulating the same receptors as GABA, and how it acts as a proven tranquilizer in horses. With little proof. GABA is given on a strict timetable for effectiveness in calming horses, Depo is used for a longer term curb on unruliness in horses, not the same thing, in my book. To me, this was a reach, to him, it was evident we were abusing the hormone.

The third vet to speak, Jim Heird,  did not seem to substantiate what Stephen was proclaiming, and produced a 2009 University of Colorado study on mares in heat and teasing stallions and each set of test mares on three different hormone treatments and the effects of estrus on all the mares and the stallions being in close proximity, blah blah blah. Are you kidding me? Since when does a competition mare compare to a broodmare while a stallion is sniffing her ass? Outside behavioral issues were not recorded in the study.  Only whether they were coming into heat or not. He was never aware of Depo being a lethal drug. He was not aware of any health side effects. The horses were not retested after one year for comparison. Is it just me or are we are really not breeding our mares during the 3’3” Performance Hunters?  It just didn’t seem to apply in a helpful enough manner.

Then Canada stepped in.

In case you haven’t heard, Canada is a freaking mess right now. The amount of resignations in the last few months has crippled Equestrian Canada and left all of its members without leadership, organization, or direction, to the point where their PONY CLUB had to send them a letter and say ‘GROW UP and SOLVE YOUR OWN MISTAKES’  so the irony of using Canadian representation to educate Americans on hormone usage was kind of like someone from Siberia educating American sports fans on Baseball. https://www.horse-canada.com/horse-news/equestrian-canada-in-turmoil/

My favorite question from the panel was “How have the judging standards in Canada compared to the American hunter industry?” and response…..crickets. He didn’t know.

Instead, Mr. Canadian guy admitted there were way stricter controls on pharmaceuticals in Canada, similar to Europe, so access to large bottle of ANY drug was really quite difficult. K.

He specifically noted, by the way, that Equine Canada could have done a way better job at implementing the start of testing (which was only in the last year), and notifying exhibitors as to a formidable withdrawal time, but they didn’t. They failed to recognize the implications of the adverse affects of the use of Medroxy-progesterone and the reality of U.S. riders crossing the border to compete in their events. So, to avoid persecution, they decided competitors would only be given a warning, not an actual sanction for having the hormone in their system. I believe he said only blood and urine was used for testing. Is Medroxy-Progesterone found in blood and urine?? He also said that it was banned because it was considered by Equine Canada to be performance enhancing, no studies had been performed regarding adverse affects.

The next speaker, our USHJA president, Mary Babick, was indeed validating ALL of our concerns about the use of hormones in ALL facets of sports, not just the elite high performance hunters. She addressed every example of hormone usage saving the animal and rider relationship, not destroying it. She also tried to make it clear that she FELT she was doing the right thing, her VET HAD RECOMMENDED hormone usage, and she was shocked at the impression she was an abuser by having only two horses in her barn on Depo-provera. She explained specifically why those two horses were better with hormone usage.  I imagine this how most of our horse show community feels. She also stated that she felt WAY more discussion and research needed to happen before taking the stance that clean sport also equated to ‘no hormone usage’.

Again, the question arises as to whether FEI rules should apply to the children’s hunter ring?

Sissy Wickes was next and had loads of membership data defending even more benefits of hormone usage and how increasing the gap between members and an “organization” was not in the best interests of any horse lover, much less the USE members and their counterparts. She was eloquent, direct, and very easy to listen to. It made you want to hold up a sign saying GO SISSY! Unfortunately, one of the participants on the panel took offense to hearing that the USE was not listening to its members and strongly denied the accusation. Balloon slightly deflated. Stay tuned to the Plaid Horse for more details.

So where are we?

We are asked to take a closer look at our culture, and our tolerance for pharmaceutical usages, the effects it will have on our next generation, and in return we are asking the US Equestrian to take out more time to actually research the amount of horses using Medroxy-progesterone/Depo/regumate/ etc and specifically why they feel it is so harmful. Education, education, education.

I do see why using the argument that women suffer from bone degeneration or arthritis is absolutely not comparable to usage in horses. It is not, to me, a viable argument. Yes, there are concerns that using Depo on women for birth control affects bone density. But human women live about 80 years. Horses live about 25, and most compete about 15-18 years in whole, if managed properly. So the possibility that horses will have a greater risk of bone fractures is actually not at all a viable argument when it comes to equines. That does not change my PERSONAL belief that it should not be used in young horses, but I understand the argument. Humans outlive equines. Horses will most likely be long retired from the show ring before developing bone deficiencies and fractures from Depo usage.

There are still many other arguments which go back and forth, and the abuse or overuse is still a big factor, but somehow this whole mess imploded onto itself. What was initially intended as a crackdown on ALL pharmaceutical use in the hunter ring has backfired, and somehow performance enhancing tactics is coming into question.  “Performance Enhancing” tactics are impossible to regulate!! That would mean no martingales to one person, or no aluminum shoes to another. It would also mean no ear plugs. Am I right?

What a shame we have wasted all this time on a silly hormone, now there seems to be no end to the possible arguments which will occur between the US Equestrian and its members. And we were off to a pretty promising start this year. well Road… meet Long.

You know what really irritates me? If this particular issue had been rolled out in a five year plan by Murray Kesslar and he was able to truly address changing the culture of showing horses in America, and provided education, multiple interesting seminars and town halls, how many of you would have gone, “yeah ok, we see the vision, we can be on board with that,” and in that time frame we could make changes within your own communities. This setback is real, and it is a shame. Do I know if it will affect our entire industry? Well, I guess now that depends on the decision of the US Equestrian. Best of luck people. Best of luck. Follow this up with the other news articles, I am sure there will be many.

2 thoughts on “I watched the Workshop….”