The demise of ‘Constructive Criticism’, and the unraveling of structure.

The absence of a veterinarian to discuss the drug Medroxyprogesterone Acetate (MPA) was heavily noted at the beginning of the Town Hall meeting in Upperville, Virginia this week. This much anticipated opportunity to discuss the science behind using MPA, commonly referred to as Depo, had a shaky beginning.

We need these meetings. We need these discussions. Without them, there is a constant murkiness lurking in our drinking water.

This particular meeting was attended by the President and CEO of US Equestrian, Murray Kessler and Bill Moroney, (both in suits), Mary Babick from the USHJA, and Matt Fine (also in a suit), the compliance officer from US Equestrian. Notably missing and supposedly busy with another emergency issue within the USEF was Stephen Schumacher. Around 100 people filled the tent, many of us exhibitors at the horse show, coming directly out of the show ring or from the stables. 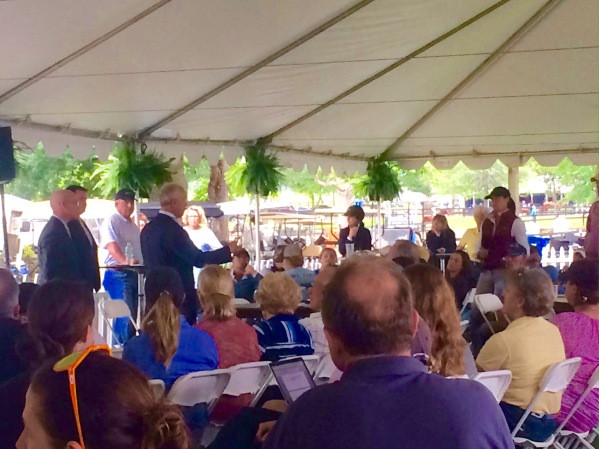 I think everyone came prepared. However, I would assimilate the preparation to the Battle of Middleburg, rather than a meeting of the minds at the country’s oldest horse show, which quietly continued on in the background. The first few minutes were, unfortunately, completely off-topic, but surprisingly started to set the tone for the evening. From the first few heated words, I knew we were in trouble. I glanced around and saw some nervous changing of weight among the couple of people standing. No one was making moves to rein in Mr. Kessler, and no one was taking deep breaths.

The thing about being defensive, is that it is an emotion. When you are accused of being emotional, it is not considered a compliment. So here we were, twenty minutes into the meeting and the mood was quickly becoming defensive and emotional. The initial request during the introduction to be polite and respectful was completely disregarded.

In his opening lines Murray Kessler brought up the legislation currently being tossed around on Capitol Hill revolving around the racing industry. It was an interesting tactic to remind us, as layman, that drug enforcement may one day be out of our hands entirely, and placed in the hands of the federal government.  I could feel my lip twitching, what’s this about?

Luckily, I have a very good friend within the American Horse Council who was able to provide extensive clarification on the Bill (which he brought up) and she was able to assure me it was unlikely to ever gain enough support both in the racing industry and within Congress to move forward, at the moment is not even accompanied by a senate companion bill, and the odds of it affecting the show industry are incredibly slim. Keep in mind the racing industry involves gambling, and interstate commerce. The show industry is not the same thing as the racing industry. This particular bill is addressing creating an “Authority” to deal with an anti-doping and medication control program on a national level with the use of medication in Quarter horses, Thoroughbreds, and Standardbred racing, rather than continuing to follow state-to state standards, which in theory would make sense. Each state has a different rule for the use of medication on the racetrack, and this bill would standardize the rules so that a horse racing in West Virginia would have to follow the same rules as a horse racing in Florida. However, the likelihood of this bill gaining ground in an already tumultuous and fractured sport is minimal to zip. Additionally, the House and Senate have way bigger issues on their minds in the current political atmosphere.

For more on that bill, you can educate yourself here.

It was an interesting distraction, but highly irrelevant. Why was it brought up?

I appreciate the President of US Equestrian attending the Town Hall, it certainly shows commitment to the job, but I don’t think he should have been there. He doesn’t have the temperament for it. He isn’t able to absorb and listen, refrain from engaging, and respond with assurance. Each of us felt it. Each of us had a finger pointed toward us and told we were wrong. Whether it was in regard to the Depo issue, or in regard to ideas on how to handle bully show managers, it was repeated too many times that we were considered in the wrong.

And there are certain issues which I am not wrong about.

I was disappointed in both sides last night.

The misuse of MPA is a problem. Of course, the mis-use of Magnesium is also a problem. Which one is the lethal drug?

This is how I see it right now:

1. People don’t believe the use of Medroxyprogesterone (MPA) is hurting the horses.

2. Veterinarians are recommending the use of MPA  for behavioral issues.

3. Riding a horse on MPA is not the same feeling as riding a horse under the influence of Ace-Promizine, Reserpene, or Magnesium.

4. If US Equestrian wants to tell us how much to use and when, we can probably all live with that. Good luck testing for it, but it seems people can be placated with the same restrictions as we have for other medications, such as Dexamethasone or Bute.

5. There really should be a set number of show/competition animals studied on the use of MPA by scientists and veterinarians before the drama continues any further.

The Upperville Horse Show is one of the most iconic horse shows in this country. Everyone looks forward to competing under the oaks, and four years ago, Mike Smith stepped in with the heavy responsibility of pushing this competition into the 21st Century. It wasn’t easy. It never is. It requires patience, a master plan, and a sh*t ton of money. On top of that, people around here are notoriously resistant to change. But change it has, grow it has, and transformed it has. Imagine taking a pair of two hundred year old rings, ripping out the carefully manicure sod, and replacing it with state of the art footing to accommodate the pickiest of riders in the country, without harming so much as a bird’s nest in the oak trees. Additionally, imagine building an entire new arena which had to blend the history of the civil war era stone walls into the rolling green hills which have seen minimal development since General Lee marched across the plains to destroy the union soldiers at Gettysburg, and failed. In the last four years, this has been happening, under his guidance, and it is an absolute stunner of an accomplishment, and not nearly completed yet, as each year, the demands of exhibitors increases. Attendance to this competition is extremely high, and it is considered a treat to show here, but it does not reflect the gripping monopoly on dates in other parts of the country. It is not a circuit. Comparing the incredible uniqueness of the Upperville Horse Show to anything else is almost completely intolerable.

Circuit showing is regarded as a reprieve for exhibitors at times, a place where they can park in one spot for a month, find a routine, sell some horses, escape snow, and keep a business rolling. Without oversight from the US Equestrian, show managers running circuits with back to back horse shows can basically run their own little city of horse showing with the comfort of knowing that exhibitors have little to no options to go elsewhere. Show managers love it, and can take full advantage of it. Before long, show managers make bad decisions, cut corners, and get greedy. Oversight is lacking, written complaints are lacking, and people want to shift the responsibility elsewhere. If the same happened to the single, yearly, iconic horse show, people would simply skip over it each year, and it would eventually fade away, or be taken over by new management, and revitalized to be a winning event.

As exhibitors, we want the USEF to be the oversight, but the USEF seems to want the exhibitors to be the oversight. Fill out the forms, they say. File the complaints, they say. Show up for hearings, they say. What should be the right balance? How much time do exhibitors need to spend filling out competition evaluation forms? Right now, we are in the middle of finding that right balance, but it looks like we, as the riders, trainers, and owners of horses in this horse world, are the ones ultimately left to steer the ship. We may not want it, but no one is leaving an option open for us, so this is where we are going to have to figure out how much it means to us. How much does it mean to you to fight for show standards? Ask yourself, then ask your clients. This road isn’t shortening up anytime soon, and our leadership has a lot on its plate right now.

8 thoughts on “Virginia is for lovers…”