The American Showjumping World could use a bit of a connection with the real world. The incredible canyon between riders showing at the top level of the sport and potential fans is eroding wider and wider at a rapid rate, and it is fairly disturbing to watch. If you walk into a room and ask a bunch of people who own horses, but are showing locally (not in Wellington), it is difficult to find more than two people who can name more than one or two riders hoping to head to Rio for the Olympic Games this year. I think this is a problem.

I have watched countless live video feeds provided by the USEF Networks, Hits, or the U.S.  (Western) FEI Channel for classes held in the United States and Mexico lately and the commentators are on a serious struggle bus. No information is provided about the riders, and we are silently watching horses jump around a course (for an extremely high amount of money), with a “too bad that rail fell”, or “what a shame, just breathed on that rail, and it fell”. I am sorry, not sorry, if we have ANY chance to know who might be representing our country in International events, this might be a good time to fill us in on the details you should know or can find out in an email the day before. How old is the rider? 18? 38? 102? Where is their home location? How many Grand Prix horses do they ride? Who educated them? Who is helping them on the ground? How old is the horse they are riding? Where did it come from? What breed is it? Is it related to any others in the class? How tall is it? Mare? Gelding? Stallion? Does it like peppermints? Hate Bananas?

As usual, we know more about the European riders and their habits or horses they ride than we do our very own home grown riders. Commentators in Europe go to extreme lengths to interview riders beforehand, walk the course with them, ask them how they are all feeling, and feed ALL of that information back to us so we feel as if we are really wanting them to win!! Look at the utter compassion and support for Bertram Allen when they took away his win at Olympia last year due to an almost invisible spur mark following the jump-off! It was a worldwide explosion over an 18 year old kid who will, in all probability, win every major title available and they will have to invent new ones for him down the road because he is such a phenom and adored by everyone; thanks again to commentators. He is the shyest kid on the planet, not exactly doing an interview an hour, so we are getting our info from whom? FEI channel commentators in Europe and European magazines.

Why do I think we need to step it up? Because if what happened to Bertram Allen happened to one of our own 18-25 year old riders in America, our horse community would have had a VERY different reaction. Think about it for a second. or five.

On a personal note, I did not initially join in on all of the hoopla surrounding the spur mark, and several people asked me to comment on it. But I was adamant and slightly bitter, because it was not too many years ago we all had to suffer through a completely unfair and ridiculously false accusation of hyper sensitivity –  I watched in absolute horror as one of our very own was disqualified at a World Cup Final because she was simply a chestnut mare. I wasn’t even there and I was completely bewildered that a horse like Sapphire, beloved by an entire generation of horsemen could possibly fail a vet check because some idiot thought her legs were sensitive, thus being prevented from what would have been the last greatest accomplishment of her career. It infuriated me, and none of us could do a damn thing about it. There was a great deal more silence coming from the International community that time around as well. You can read more about it here:

I strongly suggest you go back and click on that link.

Part of educating the public is going to come from the riders themselves. They are going to have to write the dang bios, do the interviews, demand good commentators, help us help ourselves, basically.

There are all these woes and whines about not having Nike as a sponsor for major events, and having to depend on horsey related vendors to chip in for the bills. Yet, so few of our Grand Prix events are accessible to the public, so it is not a real surprise or shock that Nike doesn’t really care about us.

A) No hotels in Wellington, so if you are not already there, the logistics of attending an event requires essential planning. Parking? Traffic? Lodging?

C) Catskills – the drive alone from any major city = headache. What do you do once the Grand Prix is over? Go to Woodstock?

D) The California Desert – ummm, it is literally in the desert. Someone from San Diego, or L.A. actually has to cross a giant mountain range to get to said desert.

Longings had a good start putting the Masters in Los Angeles last year, despite notorious L.A. traffic, and an event in Miami that drew a fabulous crowd (most of the weeks classes in Miami were free of charge), but are two events enough? I might even throw Las Vegas in the mix as a successful town if I believed enough horse people lived in Las Vegas, but I don’t think so. I have one friend in Nevada. She might go and watch one class in Vegas, but for her and for people around her, it is actually cheaper to drive to California to attend horse show and watch a big class there.

The President’s Cup in Washington, D.C.  has the heavy burden of being located in the second largest murder capitol of the country, while indeed it gets a pretty healthy turnout on Barn Night, it takes an exhausting effort from staff to pull off a successful week, and when that sniper was in town, he didn’t do any of us any favors.

So no, Nike is not likely to get on board with high end events when most of the public can’t even get to a Grand Prix, so we will keep our fingers crossed that someone will keep asking The Boss to host fundraisers for our Showjumping Team, but I would imagine without his daughter actually expecting to be on the U.S. Showjumping Squad for Rio, he might not spend all his energy raising funds for the team.

What is the answer? Better information from commentators for one. NEVER assume we know who we are watching, unless it is Beezie or McLain.

And it might be nice to have the expectation that if we are paying for a boat load of riders to compete in the Olympic Games, those riders are obligated to make an appearance to our Pony Club members to encourage them to become part of our sport. At no charge. Seriously – no charge. Help out the next up and coming talent. Do a good deed, the future depends on it, and we are paying part of your bill here so you can achieve your dreams. Then make your best friends do it. The future is pretty bleak without solutions popping up from the top level of sport.

The Equestrian World Cup Final is about a month away, held in Gothenburg, Sweden where it originated in 1979, and while yearly locations change, it is required to return there every few years or so; probably because Sweden wants young equestrians to be inspired by superstars so they wrote it into the bylaws…

The Americans were all OVER this event in the very beginning, and with the exception of Hugo Simon from Austria winning the initial class all those years ago, Americans won the title an astounding 7 times in the first decade of it’s existence! Names like Conrad Homfeld (2x), Michael Matz, Melanie Smith, Norman Dello Joio, Leslie Lenehan, and Katherine Burdsall. 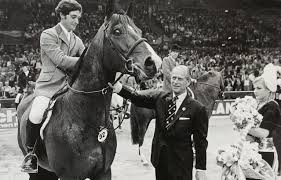 Norman Dello Joio on I Love You

It took 15 years before Rich Fellers could finally snag an American win, followed by Beezie one year later.  So here we are, it is 2016. Can you name the top of the leaderboard who has enough points to head to Sweden this year? We normally send about 15 horse/rider combinations…. Go ahead, pick some names….tick….tock….

By the way, we have one year before the 2017 World Cup Equestrian Final is held on our own home turf in Omaha, Nebraska. We have one year to speed up our education on our beloved sport of Showjumping in the United States of America.