WIHS is one of the most talked about shows in the country isn’t it? You either love it or hate it, the hassles that go along with it seem endless, but let’s face it, it is a unique horse show, and with it comes a unique experience. I love it. It’s stressful, tiring, but when it goes right, it is incredible. It takes at least a week to recover from WIHS, sometimes longer, and there have been loads of competitors satisfied with one and done, like please Lord, never let me make the stupid decision to walk this concrete jungle again….. 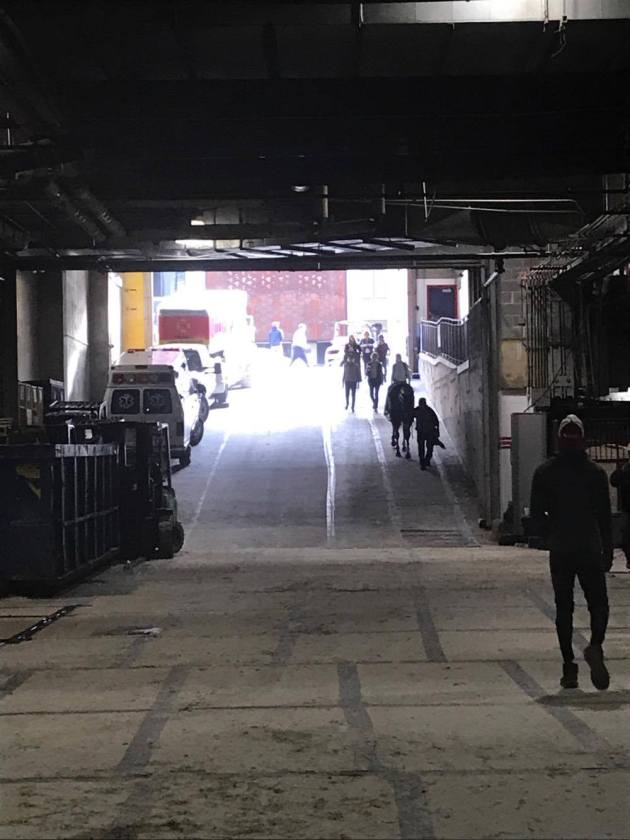 The ramp of tears can also be the ramp of glory as you rise from the basement of the Verizon Center onto a world of complete strangers looking sideways of your outfit which you either borrowed from a friend or spent thousands on custom tailoring. The strangers carefully step around the poop on the sidewalk and pause only to watch a horse or two descend from a tractor trailer, before moving on with their lives. I cannot imagine working in a city. I cannot imagine being forced to work in a bricked up, windowless, and smelly room, with a coffee pot and microwave to help get through the day.  How lucky we are to do what we do. Maybe the strangers walking to work, or walking through the city think we are part of the circus, but that is just fine by me. At night, the city sparkles and speaks around you while the country mouse voice inside you whispers a thousand times, do you think my car will still be where I parked it?

It must be so expensive to run and operate the week of craziness in downtown D.C., in late October, but to me, it is all worth it, and for the most part it is executed beautifully. The learning curve took a while, however, and I remember the utter chaos the first year, destroying the city with a line of trucks and trailers backed up all the way around the Capitol, waiting to unload one horse at a time, then one pitchfork, a trunk, one bale of hay, two buckets, a feed tub, a saddle, a muck bucket. You get the idea. It was an awful mess, and we have come a long way since then, baby.

Now, perfectly orchestrated shuttles provided by the best transport company in the country, (and the one with the most tractor-trailers – Johnson) carefully deliver a dozen horses horses at a time, complete with equipment, and an entire trailer can be unloaded or loaded in under ten minutes.  It is like watching a pit stop at Formula One. Brilliantly executed and inexhaustive in their efforts, the Johnson team has a lock on the constant, cycling horse movement from the Prince George’s Equestrian Center to the Verizon Center, and back again.

You need a special kind of horse to compete downtown. Lungeing is limited, warmup is dangerous and ridiculous, and doesn’t match the actual atmosphere of competition, so most horses are surprised when all of their friends are held back in a corner of the basement as they return to step into the ring for the first time alone, to be judged. Often it is merely who can survive the course without a major spook and not really a level playing field of judging the best horses in the country. Since the numbers accepted are so low for each division, you hardly need to pick up a pen for the judges card to determine the winner. Just kidding, sometimes it isn’t that bad…

Not that my opinion matters, but wouldn’t it be refreshing to have a class where the horses looked more comfortable with their surroundings and not suffering from shock as they stepped into the ring, and would it kill anyone to provide ONE actual show jump to sniff before slamming them with ferns and giant walls and blinding lights at show time? Just leave one big oxer in the ring while the masses are swirling around in a mad dash to get quiet. Is that really asking too much? I don’t know, I can’t stand watching classes which are merely determined by the course, and not given a chance to be properly judged, but maybe thats just me. We have seen the best of the best try to be a proven winner, only to have the horses question reality at the first jump. Is it really good for sport to watch a horse lose it’s heart in front of everyone? I guess it is, because you won’t find any green rails, decoration, or even a fake wall in the tiny warm up area.

This year the very first horse of the week entered the ring at 7:52 am on Tuesday morning, only to suffer a heart wrenching rail and leave with a score of 45. Some way to start a long week, no?

Scrolling through the start lists, I also noticed an odd number in a division, which I always find peculiar, since in the past numbers accepted in each division are fairly consistent and locked in at an early date. This is to keep the show moving at a precise and accurate pace. Yes, horses scratch, and it is nice to fill a spot at the last minute, so the waitlist is constantly being accessed right down to the wire for each division. Some might even claim there is manipulation in timing a scratch just right in order to skip over a competitor on the wait list who might live too many states away…But I don’t ever recall seeing the accepted numbers increase to include a competitor still on the wait list. 12 is 12 is 12. right? Unless you are wealthy? Special? Pretty? 13 is my new favorite number, it just pops out of nowhere when you scroll through the list of horses competing today.

So I had to check the guidelines. again. Maybe it is nothing to accept a 13th horse into the Amateur Owner division, but it leaves me a little queasy. Do you think anyone else noticed it, too? Is it ok because the horse is already competing in another division, so while it’s here, by all means be the 13th horse in the A/O division? Is that how it works? Does that work for me, too?

It is fine. Fair. Of course. We NEED the money to see these great shows continue, we NEED participation in order to pay for the use of the giant scoreboard. Play on, but maybe don’t think some of us will forget about the lucky number 13. The other exhibitors in the A/O division will have to suck it up this year, because the money has spoken, once again. Our culture, interesting, varied, and extraordinary as it is, will, honestly, never change. What a shame. But it is noticed, at least by one person.