Every year, at the US Equestrian Annual Meeting, we are bombarded with glorious presentations, pie charts, other graphs, and video montages, which all are fine and dandy, and it is lovely to feel like our Federation is moving forward, but some of us come to these meetings to actually learn, ask questions and get a feel for the people in charge and decide whether or not they really are working for us, or following a completely different agenda, only known to themselves.

For some reason, there always seems like a disconnect, but I don’t know.  In Murray Kessler’s annual State of the Union, he said ‘people don’t understand’ approximately 42 times. I picked up on it, why? Because it is an easy cop out. If we don’t understand, then maybe you aren’t doing your job, buddy. Don’t tell me I don’t understand, it is an insult on the lowest level. I think most of us are understanding more than you think, so drawing a line in the sand isn’t going to help us here. It might seem like we don’t understand because we may not care as much as you do, but seriously….. I understand.

The Federation is currently very healthy, giving away a bunch of free fan memberships this year has boosted overall numbers and attracted sponsors. Yay. Slightly misleading, yet powerful in the remarks about gaining more ground across the board with horse sports. The USEF Network will be everywhere, and the gaps left by NBC Sports not taking up television coverage will be filled with our own network, so get used to loads more USEF Network programming.

He also brought up an opportunity which sickened my stomach, but maybe the AQHA people feel differently, now that the FEI has broken up with Reiners. I would certainly hope the AQHA won’t have to fall under the USEF umbrella, but it sounds like negotiating has already begun, unless this is a pipe dream he wanted to express out loud for the first time, and is salivating at the idea of gaining 200,000 new members ….ugh. Can you imagine? Poor AQHA members, having to sell your souls in order to return to the world stage again. How awful for you all. You have my sympathies. 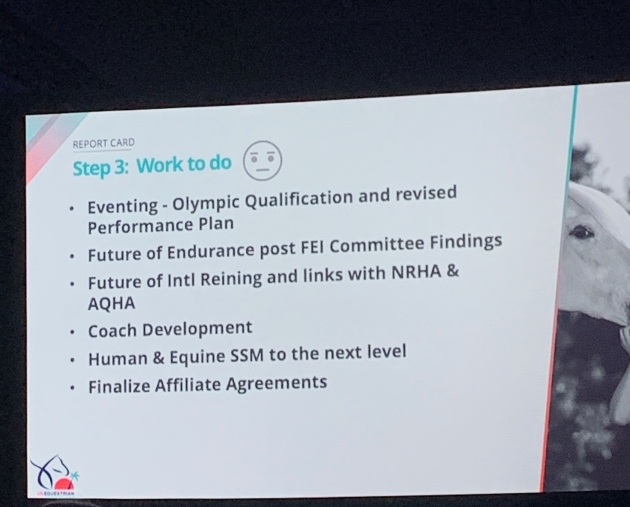 You gotta give him credit, however, because Murray is ridiculously unwavering in his commitment to achieve his goals. You cannot mistake where he intends to bring this organization, and whether you like it or not, it is going there. His Strategic Plan is in full swing, and all the tea in China cannot stop him now. The budget is under control, no one is embezzling any monetary funds, and the Federation seems to flourish with his iron fisted tactics. No one has the time to be lazy in that office, that’s for sure. He expects results, and staff is producing results. Kudos to people who answer directly to him. He is not exactly a ‘people’ person, he seems to not understand how to talk with someone, only at them, and it comes off as aggressive and well, alarmingly crazy if he is angry.  No one can accuse him of micro managing, however, and he expects the lowest level of governing committees to make the decisions to move forward rather than wait for issues to land on the desk of the Board of Directors. It is a completely different feeling than the governance within the USHJA.

The Drugs and Medication update is fairly simple. We are lucky enough to be able to outsource the drug testing to University of Kentucky and are currently setting up a new relationship with the new Lab Director there, so our future drug tests will not be overseen solely by Stephen Schumacher, thank the Lord. Also, it will eventually be an institution you will be able to have your own supplements tested, which is good. Pergolide users, as of last month you may fill out a Therapeutic Use Exemption and not disrupt your medication use for Cushings horses. You do have to prove your horse actually has Cushings, but it does alleviate the anxiety somewhat surrounding Pergolide. Never heard any follow up discussion on Depo. https://www.usef.org/media/press-releases/usef-announces-new-therapeutic-use-exemption

The affiliate meeting was probably the most contentious meeting, but the general public was closed out on it, so we missed the good stuff. Several breeds and disciplines are re-evaluating their relationship with the USEF and we all wanted to see the blood bath unfold, but were sadly disappointed. After two hours of negotiating, we were finally invited back to the room for an update, where everyone was calm, cool, and collected, and discussions on how to move forward as a group and save on bulk items such as printer ink and paper were being discussed. Also, group insurance to protect against the cancelation of competitions was requested. Alright. Well, the USEF really needs to hold to hold on to those affiliates, and vice versa, otherwise too great a financial loss will occur and we wouldn’t want a bankruptcy situation on our hands, now would we? USEF printed an official update here : https://www.usef.org/media/press-releases/consensus-emerges-from-affiliate-roundtable?fbclid=IwAR1cuhy4JhNAVhdmafs2cFM2CXDeEZqjqae0pM0Blfi0KynxFwXBCF7nd1Q

Safe Sport is still the front running topic. I swear sometimes I am more confused by the information the lawyers are telling us than what we learn on our own. I tried to point out we are all very nervous about the unknown more than being in compliance, as we are hearing more and more stories of the incompetence of the Safe Sport Center and the handling of cases. Sometimes I hear only 4 cases have been over turned, some say 13 cases, some say less than .5% of cases. Most cases haven’t been resolved and are waiting for further arbitration. I have news for you, that very first case which was overturned was the trigger to prey on our fears of false accusations. Sonja Keating swears that USEF is trying to work with SS in order to align due process more into what we have been afforded in the past as members of a riding club, so we really need to believe she is pushing back to protect us. For now I really want to believe her, but there is a lot more work to be done to get SS to stop effing things up.

We also have to admit there are a lot of unstable people out there not really understanding what makes a viable complaint worth reporting to the SS Center.

Murray admitted there were 25k-30k non-compliant exhibitors but he wasn’t going to sweat it, because only 16k exhibitors show in the first couple of months of the year, but wow, it seems like a staggering amount of people to still persuade to take the training. Double yikes.

If you are wondering about taking the training every year, we learned that the update is short, and once you take the initial training, you will only have to take 15 minute refresher test each year to stay compliant. This had never been explained before, so it was nice to hear, but left me wondering about what other information is being held back from us….

The more I thought about it however, the more I was intrigued by Murray’s insistence on USEF being the leading organization to fully comply with the USOC. See, Murray doesn’t like not being in control, or told what to do, so what are the advantages to having his organization be the first to have 100% of its members compliant? Will he use that as a way to wield an axe against Safe Sport? Is that even a thing? Is he using our compliance to negotiate with the SS investigators? I can see him or Sonja sitting there in a SS arbitration, saying look, we have complied fully, our members have complied, you all messed up this many times, and from here on out, we are going to ask you change your protocols so people don’t feel they are being nailed to a cross from day one. I know it is a stretch, but……can you see it?

Safe Sport is disappointing, there are loads of stories all over the country describing people suffering from false accusations, so we know it does happen, you really do not have due process to even know who is filing a complaint against you, the arbitration is whack, and the turnover of leadership within the actual SS Center is alarming. But until someone convinces Congress to axe the program, we are stuck with it. Obviously it is your choice if you choose to revoke your membership or use a show pass (until those are rendered extinct), but I don’t see where we can fix it through the USEF. yet..

The meetings were staged accordingly throughout the week. I was constantly wondering why the volume was up so loud in the main ballrooms for presentations (to keep us from talking to each other) and there always seemed to be a limited amount of time following each meeting open for public forum (15 minutes) or debate. This frustrated me to no end and was very calculated. I am sure they get tired of hearing us whine all the time, but too bad. Part of a good organization is to listen to the actual members. Meetings with panelists were dry and humorless, and, with the exception of the Golf Guy, I fought to stay awake. (Watch the Power of Media and Membership Part I starting at minute 13) I would recommend a voice coach to come in and teach everyone to move away from a monotone delivery when on stage, I mean seriously, we are freezing to death in these seats, at least make us laugh to keep us a little warmer. One thing the Golf Guy mentioned I found curious, the PGA Tour owns USA Golf… 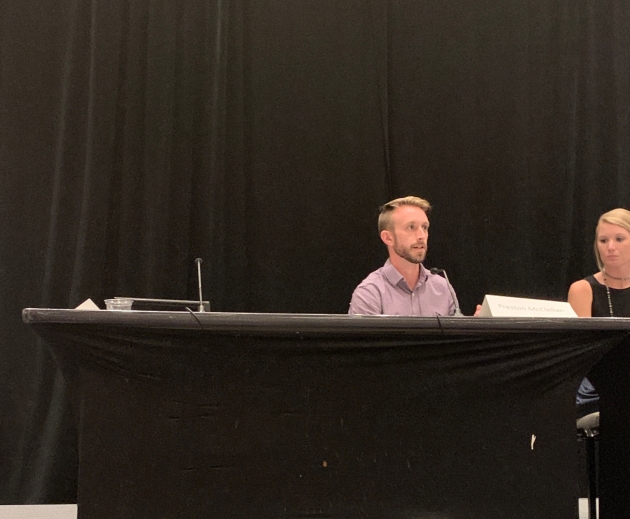 I really, really wanted to see the Endurance committee meeting, but even after their first three hours of closed door discussion, they refused to allow us in for the last hour, so I have NO idea how endurance competition is being discussed and am really disappointed.

I did see a little of the old adage ‘they do what they want anyway’ occurring… I feel for people who have worked hard on both sides of the new Licensing Officials Plan. In order to simplify the process for licensing officials, a new plan has been in the works all year. Most people were ok with the overhaul until the issue of confidentiality arose. From now on, there will no longer be confidential evaluations offered to those who learner judge along side an ‘R’ judge. I didn’t see anyone stand up for these opposing voices at the USEF meeting. Maybe it was voiced behind closed doors. No idea. This may or may not change the dynamics of learner judging but we won’t see the repercussions for quite some time. For years, the confidential evaluation forms allowed the person filling them out to give an honest assessment of whether or not he/she felt the learner judge was capable of earning a license. In a world of unstable people, will knowing what your mentor said about you cause you to be offended and retaliate? Hope not, but like I said, the world is full of unstable people.

Many sessions are available online. They are using their own resources to do what you have demanded, so I urge you to go watch a few sessions and educate yourself. Maybe you will come out with a different perspective than me. Maybe you will have better ideas than me. Maybe you will see a solution where I could not, and be willing to stick your neck out for what you truly believe in. Maybe next year Murray won’t have to say ‘you don’t understand’ in as many places in his speech.