The Baltimore Agricultural Center (commonly known as MARC) in Hunt Valley has some serious issues lately, and an odd turn of events has sparked some serious emotions of residents in the area. What was supposed to be an open space piece of property just west of 83 on Shawan Road, and cater to education of agriculture to kids across the state, along with a  possible therapeutic riding center has suddenly and unexplainably been earmarked for a ‘Truck Depot’ for county maintenance vehicles.

Residents learned this week that a rather large chunk of property would be paved, buildings added, and home to an alarming number of these county vehicles, trucks, trailers, snow plows, and whatever else the county felt they could store there. 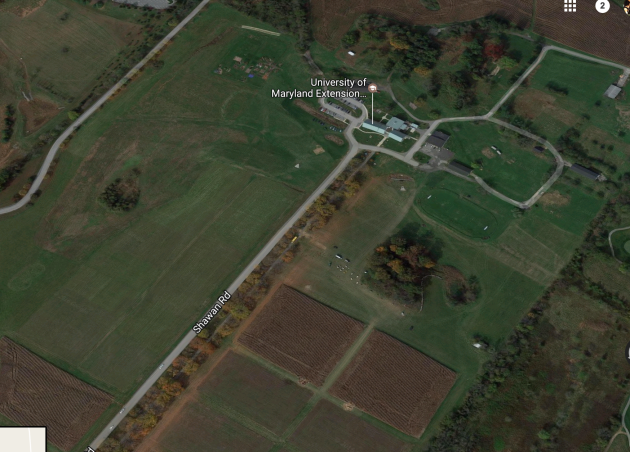 The problem is, this is not what the property was destined for in the beginning, and no residents were contacted before this initiative was put into action. Plans have already been drawn up, which means surveyors have already been hired, artists paid for the drawings, and most likely contracts have been ‘promised’ to contractors, because….well, that is how politics works.

So Wednesday evening (Jan 4, 2017) residents were invited to a town hall of sorts at the Ag Center, and it was discovered that another meeting has already taken place back in October outlining all of the proposed plans, but the public interpretation was different.  This time, however, even with very little notice, over 200 nearby residents showed up, none of them too happy, and it was very clear the intent. 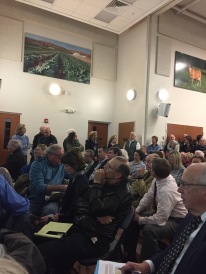 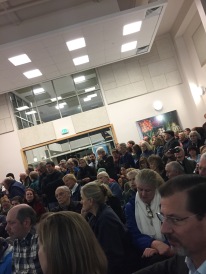 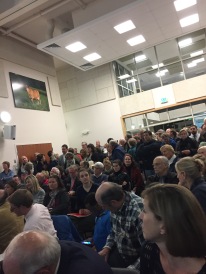 Chris McCullom, known as a manager/executive director of the Ag Center, tried to explain how the facility was going to be restructured as a ‘truck depot’, blatantly holding off questions during his presentation, and showing very little interest in what the community feels about the change. It was awkward. 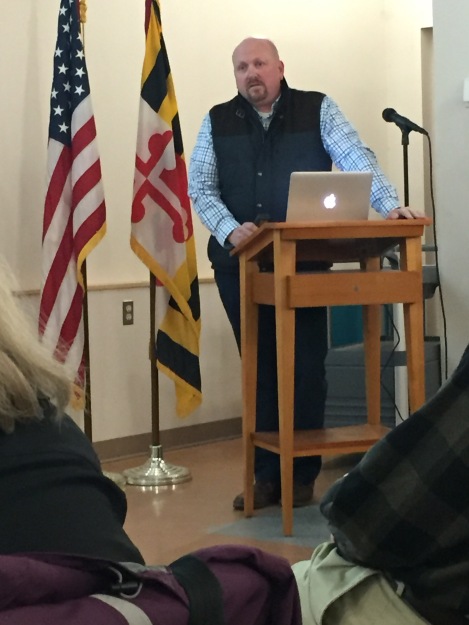 When he finally opened up the floor for residents to speak, and question after question was asked about how we even got to this point, he was very clever NOT to answer any questions, and would simply move on to the next hand raised. When people finally caught on to this little trick, they started demanding who he was going to relay the concerns to and he grew even more vague. His use of the word ‘WE’ was firmly questioned. Who is the ‘WE’ he kept saying was behind this move for the ‘truck depot’?? At one point, he mentioned his ‘bosses’, and when pressed further, said his bosses included the Head of Property Management and a county executive for Baltimore County, and, even though he didn’t name Kevin Kaminetz, it was pretty clear to the room, that Kevin is one of those ‘bosses’. The weird thing is, I don’t think it is actually ALL Kevin. When I was doing more research, I found this on the website:

Finally, you will find few material changes to the capital projects being submitted for your review. As in previous years, County Administrative Officer, Fred Homan, and Budget Director, Keith Dorsey, are here to answer any questions you may have.

Uh, hello, why were these two individuals not present at the meeting with the people who had ALL THE QUESTIONS??

It didn’t appear as though anyone in the room has been a fan of Kevin Kaminetz and his current position in Baltimore County, but I couldn’t help but think who else?? Fred Homan has an awful lot of arrows pointing in his direction. A simple google search of his name and the articles associated with him would make me basically just give up and move to another planet, if I was him. Regardless, this ‘truck depot’ issue is on the table now, and someone has to figure it out if it is going to work at the Ag Center. 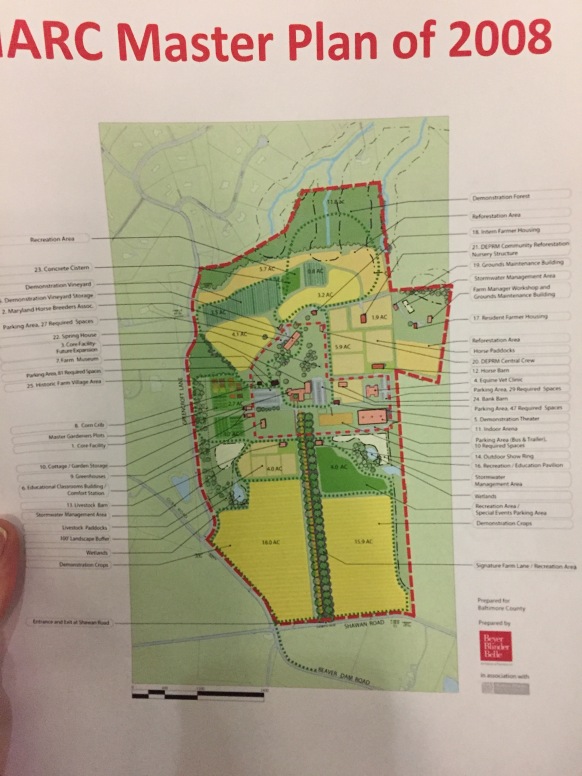 original plan the community agreed with

There were three gentlemen who were invited to speak about an hour into the meeting, and all three reassured the room that they were against the initiative, but not necessarily surprised, unlike the rest of us. 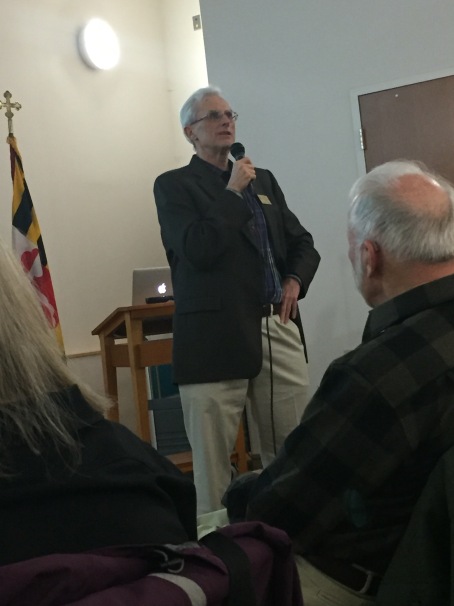 The first County Councilman Wade Kach spoke to saving open space, which was the whole point of  having the Ag Center in the first place. He also suggested that we come together as a group and find a place to house the trucks for the county, other than the Ag Center. I thought this was funny, because, last time I checked, that is not our job, and why we have people already in place to solve that issue, but whatever, that’s just me.

The second was our Senator Jim Brochin, who reiterated all the above with more gusto, and the third was Chris West, who with Susan Almond, oversee movement from Towson to Pennsylvania. He was quick to come up with bullet points from the meeting and implore to Chris McCullom to take the truck initiative back to ‘his people’, and find a different solution.

The uneasy feeling in the room seemed to come from, how do we know what happens next? Who do we contact? Who do we trust? And how can I make a difference? These are serious residents who moved to the area, are currently receiving new assessments on their properties, and wonder if anyone is looking out for their investments. I think it is a really good concern, but wonder if the truck depot is just a major distraction to the community in order to seal the deal on something else entirely.

Chris McCullom appears to have definite aspirations to be more than the executive director of the Ag Center, so he is able to detach what he thinks is right for the property and that might be what he is not telling us. When you watch someone with clear confidence handle the strong opinions of the room and is not willing to provide alternatives, solutions, or even show he cares? That is very dangerous, and disturbing.

Not too much is going to hit the media with this issue, so don’t think you are going to read big articles exposing both sides. This was all that was available on the one news group who showed up at the meeting:

Maybe now is a good time to think about getting your toes wet in the political circles if you feel your voice deserves to be heard. Use the google. read…

Options for an alternative truck facility? Guess you could start keeping your eyes peeled for empty properties. Ironically, I live very close to an abandoned property in Greenspring Station, just five miles south of the Ag Center. On the corner of Joppa and Falls road, there is a rather large un-used facility which could easily house 30-50 trucks, has virtually no impact on residents, and is more accessible to major and minor roads in the same community. It has already been used for this same purpose in the past, storing salt, and trucks, but sits idle for no apparent reason.There is a salt dome across the street. You can see it in the picture below.  Couldn’t part of the money be used to rehab this facility? It already exists AND has beautiful landscaping to prevent it from being an eyesore! 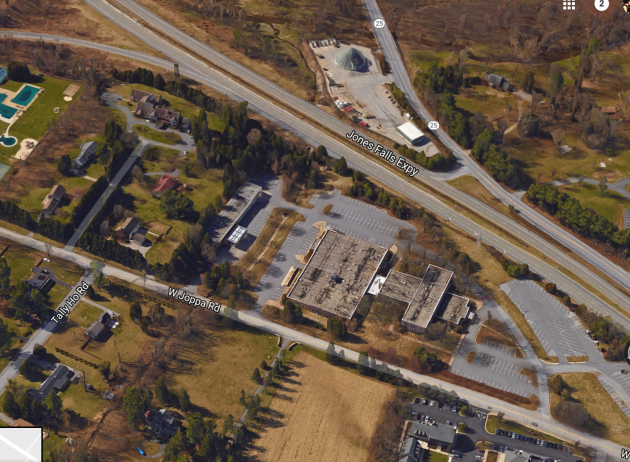 Why is this not under consideration? 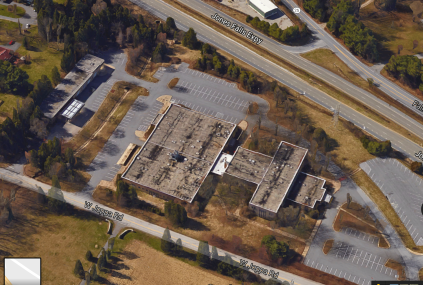 millions in landscaping already exists at this facility!

If the real issue is how to spend the $2.4 million coming from the State of Maryland, and we are not smart enough to work together as a group to work with our representatives, we are going to be in incredibly dicey waters in the future. Is that money supposed to be used for a classroom and indoor arena? Are we sure? Is there more coming? Should you find your voice today?

One thought on “Truckin in the valley”