I make no apologies for the weird things rolling around my head.

One thing I am constantly questioning is sponsorship, who are our horse shows taking money from? As the Maclay Finals are approaching, I am curious about this constant support from the ASPCA. I am long versed in the ties between the two, and I will help you understand it right now.

This hyperactive dude Al B Maclay was born in New York and his father was president of this crazy successful Knickerbocker Ice company and sold a helluva lot of ice cubes to people in the city before electricity was invented. There was huge scandal when that company figured out a way to ‘merge’ with other companies creating a ‘monopoly’ (insert irony) on the ice market. Millions were made, and for that time, really gazillions were made, so when Alfred did his whole professional job as banker and financier, he was doing pretty ok. He decided to buy a farm in Millbrook, New York and obsess about horses and dogs. He met a girl from a family that had an insanely successful bakery company called the Fleischmann Bakery Company of NY. bread and butter, with a side of love.

Al decided to serve on the board of the ASPCA somewhere in the early 1900’s, (founded in 1866 by Henry Bergh – cool dude looking out for carriage horses)  and was trying to figure out a way to get junior riders more involved in horse shows. Al was already the President of the AHSA, showed horses every weekend, and was really paying attention to the horses bred overseas in France, Hungary and Germany because he felt they had better War Horses.  history buff read this. 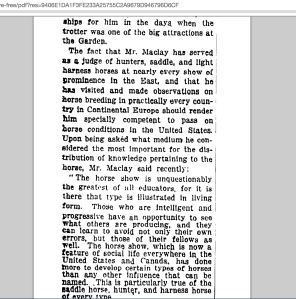 in 1933 Alfred B Maclay donates a Trophy to junior riders competing at the National Horse Show displaying excellent horsemanship skills. The Maclay Finals are born.

Now a funny thing happens as time goes on. this ASPCA non-profit organization rolls on, presidents change, accumulating wealth, distributing so called wealth, promoting good treatment of animals, yada yada yada. Then in our millennium somebody smells a rat. or a scam.  And investigates. And publishes this… https://www.activistfacts.com/organizations/american-society-for-the-prevention-of-cruelty-to-animals-aspca/

“Even Mayor Michael Bloomberg—the guy who’s so nosy he wants to ban Big Gulps and mandate sodium restrictions—wasn’t in favor of banning horse-drawn carriages. So when Bloomberg’s reign came to an end, the ASPCA and other activists saw their opportunity. Current Mayor Bill de Blasio promised to end horse carriages as soon as he took office (he didn’t), while candidate Christine Quinn opposed the ban.”

I can tell you right now this so called war against carriage horses in the city is bullshit. These animals are just fine, they are cared for by amazingly obsessed carriage drivers, and every person around NY loves to see them, pat them on the nose and give them a carrot. However, the stabling for these awesome animals is on crazy valuable real estate, and every money obsessed mongul has a plan for that real estate. WHY was Mayor Bloomberg adamant about keeping the carriage horses? Maybe because he had this ultra cool daughter Georgina  -she loved to ride, represent our country, and the two of them could make a pretty good educated decision about the fair and ethical treatment of animals. DUH.

The fact that the ASPCA went after the carriage horse business and helped to try to shut it down screams corruption. These are people lacking respect for their roots.

Personally, years ago I lost all respect for the ASPCA, PETA and the Humane Society of the U.S. I made a vow to never support those organizations again, because it is impossible to know exactly where your money goes.(insert USEF, oops) I know exactly NO ONE that jumps up on FB and says “omg thank you ASPCA for finding this cute puppy named Clyde for me!!” hashtag heart. hashtag love. hashtag happy forever. get real.

So then I want to look at WHY the National Horse Show is still so tied to the ASPCA? Why are we not keeping the true animal lover closer to our sponsorship ties? It pains every molecule of my soul to see ASPCA tied to the Maclay Finals. I want the people we know, we love, we respect, to give us those goody bags when we pick up our back numbers.

The National Horse Show (www.nhs.org) cannot possibly be getting that much sponsorship from ASPCA to make a difference for the final. Junior riders pay $35.00 for a membership fee, and according to the website, it looks like $25 of that goes to the ASPCA. Trainers pay $50, and $15 of that goes to NHS.

1800 juniors, 1000 trainers – NHS gets 33K, ASPCA  80k and then competition secretaries have to pay something.Every horse show pays 10 bucks to the NHS for a Maclay entry. So the minimum the NHS gets a weekend is $60. Slip in a class of thirty at Saugerties, and the number jumps to $300. Slip in 20 horse shows occurring around the country that weekend and you are at 6k. say a whole bunch of Maclay classes held across the country that weekend, $100k, 53 weeks in the year…you get the idea. They are doing ok. And I would have to assume that the 80K we gave the ASPCA at the beginning of the year is just flopped back over to the NHS for Maclay Finals?

What I want to know is, why are we not thinking about turning the tables, moving forward, and keeping the sponsorship closer to the people we know and love?? It is called evolving. If you had to pick an organization  to sponsor something animal friendly, sportsmanship friendly, etc. who would you choose? My personal pick would be Danny and Ron’s Rescue. If you cannot relate with what this organization does, you are a complete idiot. Google it I have no time for you, but if you haven’t posted a pic of your favorite dog on their Facebook page, your best friend has. click here.https://www.facebook.com/DannyRonsRescue

Create new traditions that are RELEVANT for today’s society. There is absolutely nothing cuter than Danny and Ron’s rescue logo on a saddle pad, and I am sure if you asked them, they would feel totally honored to represent the Maclay finals. Give THEM the 80k at the beginning of the year, let THEM go save more dogs!!

THIS is the type of organization that needs stability for the future, not the creepy ASPCA. And the National Horse Show has LONGINES as a sponsor – so much cooler and hip in my opinion. That company probably loves to give loads of money to the show! What junior rider in this millennium can’t relate to this super cute logo?? 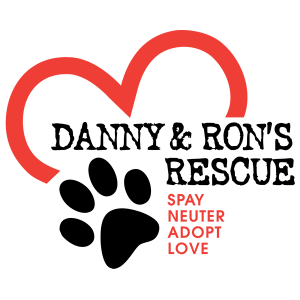 I don’t know, maybe I am wrong, but I can’t help it if I have raised these questions in my head over the years. I question everything and it rolls around up there while I am riding around the hunter ring, because it is not that complicated or exciting to steer over 8 jumps and do a hack class, so mind wanders. It can’t hurt to think about it anyway.

Juniors – you are welcome for the history lesson. Trainers – you should have told them the origins of this class already.

Go save a dog. here. http://www.dannyandronsrescue.com/

10 thoughts on “ASPCA and the Maclay”